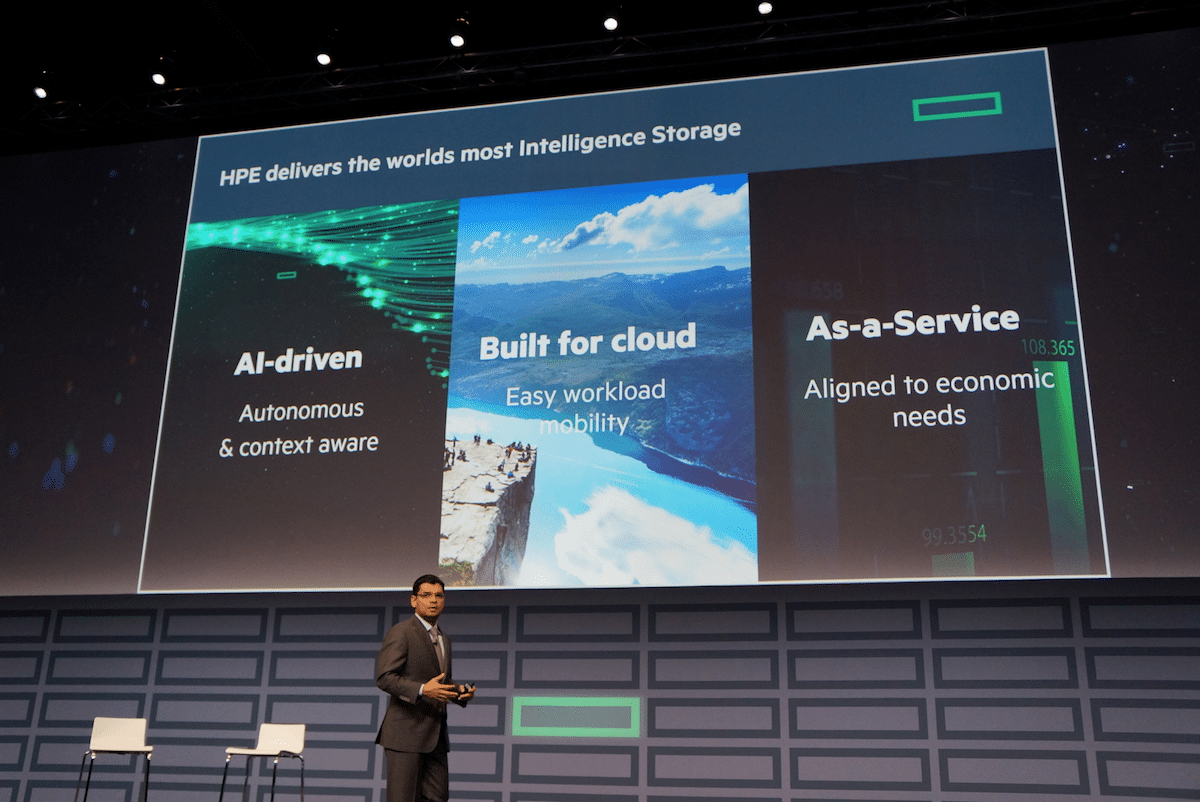 At Discover 2019, HPE announced a new storage platform called Primera.  This new product is positioned as a successor to the current 3PAR offerings.  What exactly is Primera and what first impressions can we gain from the information released by HPE so far?

It’s worth reviewing the HPE storage portfolio for a moment, as that will provide some additional context to this discussion.  Currently, HPE has three main primary storage platforms.

We won’t cover the XP7 in this discussion as the product is niche, not really promoted by HPE and there for customers that need specific feature support, like FICON.

The original 3PAR systems were aimed at service providers and built to be easy to manage and operate.  Part of the design philosophy was to ensure data hotspots were eliminated by distributing data from volumes across as many backend disk devices as possible.  We won’t dig into the architecture here, however, you can find links to more detailed information included in this post.

Nimble storage solutions are based on a dual-controller architecture that was designed to use flash as a read-only cache.  The company also developed a platform called InfoSight that was used to collate system information from devices in the field.  With data from InfoSight, Nimble could eliminate level 1 and level 2 support roles, as most common problems could be fixed dynamically or discovered through the InfoSight portal.  It also made it possible for a relatively simple architecture to deliver six 9’s of availability.

Whether the company is prepared to admit it (or not), a key driver for HPE buying Nimble was the benefit InfoSight offered. HPE clearly saw the long-term value in using the analytics InfoSight provided.

As a result, InfoSight was added to 3PAR, has recently been added to SimpliVity and is also available for servers.  As part of the 3PAR addition, HPE improved the analytics process, pushing some of the work down to the local service processor on 3PAR systems.  The AI logic effectively uses the wisdom of the (storage) crowd to generate algorithms that can detect and identify anomalies in 3PAR workloads.

My own personal rule-of-thumb assumes that storage architectures have around a 20-year lifetime.  This is without going through a major architectural rewrite process.  Just recently we’ve talked about the evolution of CLARiiON to VNX and eventually to Midrange.NEXT.  Dell high-end platforms have also had frequent design refreshes.  NetApp has performed similar reviews.  So we can see this is pretty standard in the industry.

The 3PAR platform is currently 20 years old.  It was designed in a time of spinning media and SCSI connectivity.  Since then, the 3PAR team, both before and after acquisition, have made great steps in adding functionality like data services and platform resiliency.

Eventually though, the availability of new media and faster hardware means revisiting the design of a storage platform and either starting from scratch or performing a major rewrite.  There are lots of start-ups taking advantage of NVMe, SCM and SmartNICs.  Eventually, existing architectures simply can’t compete.

These new technologies offer significantly lower latency and greater throughput (both IOPS and bandwidth).  As a result, they challenge the inefficiencies seen in older storage architectures, forcing a change in design or a radical re-write.  Bear in mind that in the last 20 years, processor performance has also increased perhaps by two orders of magnitude too.

HPE has brought Primera to market as a replacement for 3PAR.  Although 3PAR won’t be phased out immediately, it’s pretty clear that this is the intended direction.  When David Scott ran the storage business at HPE (after the 3PAR acquisition), the 3PAR platform extended in breadth with both high-end and low-end models.  We can expect that Primera, as a tier-0 solution, will meet high-end customer needs, while Nimble will do the rest. 3PAR will then have a gentle retirement as customers are transitioned to new solutions.

What do we know so far?  It’s interesting to note that HPE hasn’t released a lot of typical speeds and feeds data on the Primera platform (although Chris Mellor has been doing his best to get more details).  Instead, the focus has been on the value the solution can offer to businesses.

However, we do know that there will be three models:

The 670 model will have faster Skylake CPUs than the 630 and 650.  Each controller node has two CPUs and one Gen6 ASIC.

It’s interesting to note that the Primera design echoes 3PAR with even node counts (two and four).  However, there’s no 8-node system.  I remember David Scott once telling me that customers never really bought them anyway.

So, is Primera simply the next generation of 3PAR?  HPE is at pains to say this is definitely not the case.  There’s a lot of 3PAR “heritage” in there, but the design of the two systems aren’t compatible.  You can’t run the 3PAR OS on a Primera system and vice versa.

Does it really make sense to try and build a storage system from scratch?  If you’re a start-up, then it does, because you have no code or pre-existing designs.  Even when that’s the case, we see lots of start-ups with architectures that are echoes of the platforms the founders worked on previously.

For HPE, it would be crazy to ignore the strengths of the 3PAR solution and build a totally new system.  Instead, it makes sense to look at the aspects of the design that worked well and use them as a basis for a new platform.

As a result, we see features like the active/active mesh design being retained.  Data is spread across all media in the system.  Features like peer persistence will exist in Primera.  This leads us on to the obvious question – what’s changed with Primera to make it a worthy successor to 3PAR?

Looking at the hardware, HPE have made Primera simple to manage.  Customers can do field-replacements and upgrades of common components.  This isn’t suitable for all customers, but for those deploying at scale, having the ability to do proactive maintenance and replacement may be attractive (especially if it reduces support costs).

Nodes appear to be connected to each other by a PCIe switch (through a passive backplane).  If this is correct, then all of the nodes (controllers) can access all devices, vastly increasing performance and reducing issues like cache replication for coherency.

Platform functions have been split off to run as micro-services using containers.  This allows individual components to be upgraded separately, while also allowing them to scale on demand.  The micro-services architecture also helps Primera developers, who can add new features and functionality without an entire platform software refresh.  We’ve seen the micro-services approach already from other vendors, such as WekaIO.

The platform moves to a new ASIC (generation 6), redesigned for parallel processing.  HPE has also looked at the latency overhead of using the ASIC compared to doing some work in the processor (using Intel QAT).  As a result, tasks will execute in the place that provides the lowest latency to client I/O.

Primera will be fully API driven.  This means that every function is API operated, including the GUI and CLI.  This is a big step in ensuring storage can be made invisible in the data centre.

Probably the greatest focus placed on the new platform has been in building more intelligence into Primera.  The embedded AI engine is designed to eliminate traditional issues like hotspots and workload balancing by detecting anomalies that don’t match traditional workload profiles.

The AI components are obviously the next evolution of InfoSight and aimed at increasing availability as well as reducing the burden on storage administrators.

Just as a side note on the use of InfoSight, one benefit of the platform is the ability to take many years of historical data and use it to generate future insights.  If HPE had built a completely new platform with Primera, then that would have meant starting from day zero with no historical data.  Keeping the core of 3PAR means HPE can retain that historical knowledge and use it in Primera.

Because of the benefits AI/ML brings, HPE is offering a 100% availability guarantee with Primera arrays (detail here).  Naturally there are some qualifying criteria, but credits of up to 20% of the original purchase price are on offer. We discussed the issues of storage vendor guarantees on a recent Storage Unpacked podcast.

One interesting aspect of the Primera announcement is the option to move to a more operationally-focused consumption model with Timeless Storage.  The plan offers in-place upgrades every three years, as long as customers retain their service contracts.

With the ability to do in-place upgrades, this makes it easier to meet a 100% uptime goal from the perspective of end users, especially with HPE’s own 100% availability guarantee.

I’d like to dig into the Timeless model a little more as this transition towards storage as a service is becoming an industry trend.  Look out for a future discussion on the subject.

What’s not in the new platform that we could have expected to see?  Firstly, HPE is describing Primera as “NVMe Ready”.  To me that means the hardware is physically capable of taking NVMe drives, although the systems will initially ship with SAS drives.

Why no NVMe from day 1?  Personally, I suspect that further code optimisation is needed to get the best from NVMe hardware.  I was surprised to see that Primera will continue to support hybrid deployments that include hard drives.  The code needed to optimise HDDs, SSDs (SAS/SATA) and NVMe will be pretty complex.  I was expecting HPE to drop support for HDDs, especially in a “tier-0” array.  Hybrid requirements could have been pushed to Nimble systems or delivered from current 3PAR systems.  This won’t be the case and maybe that’s creating more complexity than needed.

I’ve not been able to find any specifics; however, I believe Primera will not support NVMe-oF from day one.  I would have expected the platform to have at least supported FC-NVMe and offer capabilities for existing Fibre Channel customers.  It looks like we’ll be waiting for some time on this.  I also think that although Primera is designed to use SCM, until Intel releases dual-ported Optane drives, this technology will be a “future enhancement”.

How will Primera address public cloud requirements?  We’ve seen HPE Cloud Volumes provide storage to AWS and Azure environments but what about within the public cloud rather than adjacent to it?  I’d like to understand HPE’s strategy a little more in this area.

Overall, I like the evolution of HPE’s current systems with the release of Primera.  For me, the specific details of the platform implementation are less important.  What’s going to resonate with customers going forward is the ability to rely on a solution with as close to 100% uptime as possible.

Customers want to make storage invisible, so building in API-driven capabilities and as much self-optimisation as possible allows businesses to reduce their management overhead.

Finally, the purchasing model of transitioning to an Opex or service-based consumption is great and is a stated direction for all of HPE solutions.

I’d like to see more of how Primera will fit into modern application environments and integrate with automation platforms and private cloud.  As HPE moves the Synergy and composable message forward, Primera looks much better suited to deliver here than previous systems.

This is perhaps where the long-term value exists – creating a 100% reliable and available shared storage for composable private cloud.