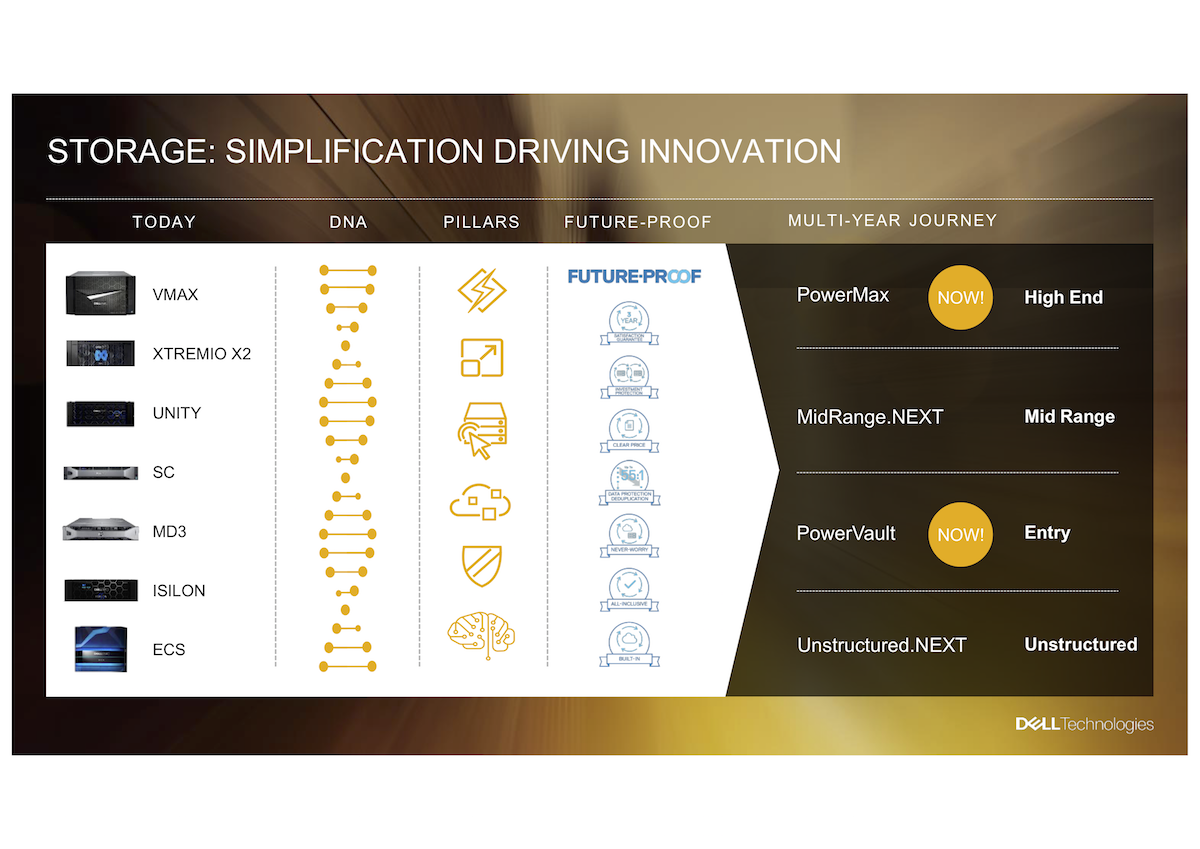 In this week’s Storage Unpacked podcast, we took the opportunity to look at the potential challenges and issues involved in Dell EMC bringing what is being called “MidRange.NEXT” to the market.  This is the consolidation of the existing mid-range storage solutions including XtremIO, Unity and SC series (Compellent).  This post looks deeper into the details and what we might expect to happen.

With the acquisition of EMC in 2015, Dell gained a range of enterprise and mid-range storage platforms.  In mid-range this included XtremIO, SC Series and Unity (the historical successor of VNX and CLARiiON).

I’ve written a lot on the XtremIO platform, not all of it positive.  At one stage, XtremIO was touted as the go-to all-flash platform and could have been seen as a successor to VMAX at the high end.  Unfortunately, the XtremIO architecture had challenges, not least of which was a need to extend internal metadata structures that resulted in a destructive upgrade.  Dell EMC eventually started positioning XtremIO for mid-range workloads (such as VDI).  I’ve included my XtremIO posts here for reference.

The Unity platform is the historical successor to the original CLARiiON platform that transformed into VNX/VNX2 before becoming Unity.  The platform has had some major enhancements over time, probably the biggest being the move to multi-core processor support, also known as VNX MCx.

Unity is feature rich and as Martin described on our podcast, is arguably the most successful storage platform of all time.  In a presentation at Storage Field Day 14 in November 2017, Dell EMC claimed 20,000+ customers and 35,000+ systems deployed.

The above figures also include the SC Series, which was an original Dell storage platform from the acquisition of Compellent in 2010/2011. The Compellent architecture was based around commodity hardware with a unique tiering mechanism for making the most out of ageing data and a range of storage media.

With the move to all-flash, it’s become harder to see the potential value from SC, as tiering to hard drives is eliminated.  The tiering feature may become more important, however, as we see more adoption of cheaper flash like QLC.

With the move to all-flash, it’s become harder to see the potential value from SC, as tiering to hard drives is eliminated.  The tiering feature may become more important, however, as we see more adoption of cheaper flash like QLC.

Why consolidate? Well, with three separate storage platforms and development teams, then there is significant overlap and additional internal cost for Dell EMC.  It makes sense to harmonise the mid-range products into a single family that also makes it easier to sell to the market.

Bringing products together also makes sense in an increasingly service-focused and multi-cloud world.  Customers are becoming more interested in features and functionality, not the underlying hardware and implementation.

From the Ground Up

With three existing platforms, should Dell EMC build a fourth new platform and move customers over, or should they look at keeping one as the foundation of a new platform and build in features and support?

The idea of starting from scratch on a new storage system is certainly a challenge.  Most new storage platforms today are built on the premise of a new feature or design that supersedes what’s gone before.  As an example, XtremIO was focused on greater efficiency and resiliency with flash.  SC Series was optimised to make the best use of multiple media types and tiering.

Other solutions in the market have been based on implementing scale-out or optimising for NVMe technology.  Is there a good justification for starting from the beginning with a new platform, when the aim is simply to consolidate what is already in place?

That leads us to a point where we could imagine one of the existing platforms becomes the long-term successor and develops into MidRange.NEXT.  But which one?

If I had to make a choice, personally, I would use XtremIO as the physical hardware and data protection layer, while looking to mitigate some of the challenges around needing symmetric node deployments.  XtremIO is already fast, so performance wouldn’t be a problem.  However, using multiple tiers of flash might need some thinking and that’s were bringing in IP from the other platforms could work.

I don’t see enough reason to choose to build a fourth new platform and migrate customers into that solution, because this would involve a greater effort than simply moving customers from two existing solutions – depending of course, on how different MidRange.NEXT was from one of the existing products.

One important aspect highlighted by Martin in our podcast was the existing user base of Unity. This in itself represents a real challenge for any successor platforms.  As we’ve mentioned already, Unity is an old system that derived from CLARiiON via VNX and VNX2.  This brings with it a lot of baggage, although it’s fair to say a lot of changes have been made to the platforms over the years.

On the flip side, with so many customers invested in Unity, processes, scripting and skills will be very mature.  This represents another challenge for Dell EMC because moving to another platform could require re-writes, new training and changes to automation and backup/DR processes.  Will a customer want to pay for this extra cost or use this as an inflection point to try another vendor?

As a result, whether Dell EMC chooses to stick with Unity or not, could depend on the issues around this single point alone.  It may be seen as simply too much of a leap for customers to make.  Unless however, there was another way to implement consolidation.

With so much value being delivered in software, the most logical way to retain the features of the existing mid-range platforms could be to containerise each of them and allow a system to support multiple “personalities”.

This idea isn’t without precedent.  The VNX merged CLARiiON and Celerra products into a single platform supporting both file and block.  The file persona was simply another appliance that sat on CLARiiON block LUNs.  Over time the file persona has moved purely into software.

So why not do the same with Unity and SC?  Unity already exists as a virtual machine.  I’m sure the features of SC could be abstracted too.

The question we have to ask is what benefit there would be in emulating existing solutions.  Yes, customers would get the same look and feel of their existing products, but what advantage does that deliver in the long run?  At some stage, customers need to be encouraged to move to another long-term solution.

In some respects, I agree with Martin that forcing customers to rewrite scripts and change processes is probably necessary.  Finding a way to do this without incurring risk and cost will be the challenge.  For data itself, customers will need some kind of migration tools and even interfaces between existing platforms and MidRange.NEXT.

Where systems are already virtualised, the migration process is relatively simple – create new datastores and vMotion.  File shares are harder and physical servers require some more thought.  These migrations can get really complex when there are many dependencies like snapshots and replication – or even public cloud.

That gets us to the subject of who will manage migrations and whether this is an opportunity for Dell EMC to review customers’ requirements.  Both vSAN (from the VMware house) and VxRAIL from the Dell EMC side are solutions that could replace existing server/storage deployments.  So, we could see simpler customer environments move away to converged solutions, including VMware Cloud on Dell EMC.

How much of an opportunity is this transition for other vendors?  Pure Storage has already released a blog post aligned to Dell Technologies World 2019 that offers some thoughts to consider. I’m sure other vendors will look to do the same. Naturally, it’s to be expected.

Reflecting back on the content of this post, I’ve not touched on what could be new in the .NEXT platform. Inevitably we will see the obvious NVMe/NVMe-oF support, more all-flash options and perhaps at the high end, some use of persistent memory.

At this point, what else can the mid-range market offer? Perhaps a closer convergence of storage and compute, with some workloads, like those in containers or serverless, moving to the storage layer. This could work as part of an initiative to support Edge computing.

I have no crystal ball or insider knowledge, but I would say that for many customers, the days of running a dedicated storage platform may slowly be coming to an end.