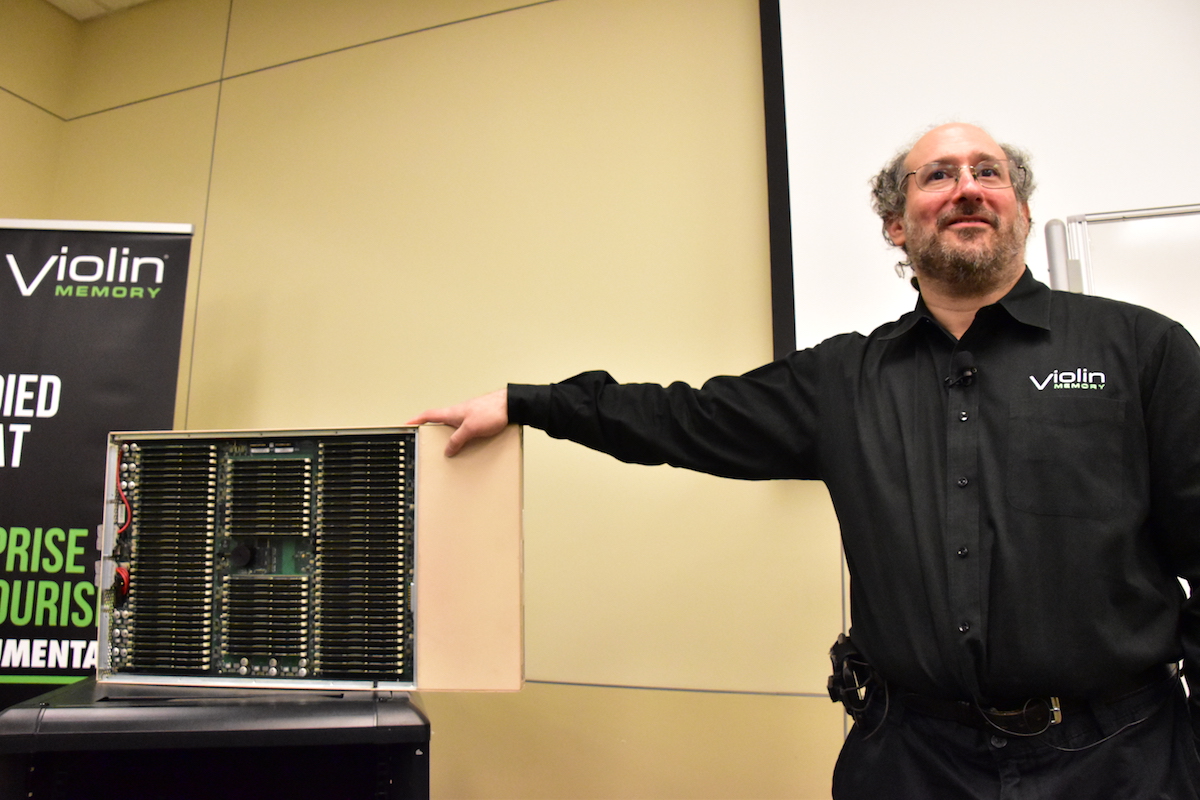 It would be fair to say that Violin Systems (the former Violin Memory) has had a turbulent existence.  Once the darling of the industry, Violin missed the all-flash evolution and fell on hard times, going bust and returning with new investors.  Last year the new CEO stepped down to be replaced by Mark Lewis, previously of EMC.  So what’s changed in the strategy, if anything?

A Bit of Violin History

Violin Memory was without a doubt one of the pioneers of the all-flash storage market.  The company took the approach of building custom flash modules called VIMMs, each of which contains a dedicated controller, management processor, DRAM and NAND flash.  Put 64 of them into an array, connected to the Violin Switched Fabric (vXF) with custom FPGAs and you have a platform that delivers a highly efficient global Flash Translation Layer across around 8000 individual flash die.

As a piece of technology for the time, the Violin platform was a leader.  It offered systems with low-latency and consistent performance – but lacked data management features.  Eventually the technology gained the features needed, arguably too late for a market that had already moved on.

Just under 12 months ago, we looked at where Violin was headed in a blog post and podcast interview with then CEO Ebrahim Abassi.  There seemed to be great plans afoot for the company, with new products in the pipeline, some of which were allegedly set to challenge the existing market incumbents.

Fast forward to today and Mr Abbasi has since stepped down as CEO due to ill health (as already mentioned).  So at this year’s Flash Memory Summit (2018) in Santa Clara, I spoke to new CEO Mark Lewis about where the company was headed.

Compared to the last CEO discussion, this one was very different.  The watchword for 2018/2019 for Violin is “Focus”.  Mark Lewis has cancelled projects and is taking the company back to where it started – as an all-flash dragster platform for block storage.  With limited budget, it makes sense to be focused, but will this actually help?  The all-flash market is crowded and there’s more than enough competition to go around.  As a result, I think Violin Systems has problems:

At this point in time, I’ve not seen any roadmap or plans for future products.  Technology wasn’t even discussed during our conversation.  Dave Raffo at TechTarget obtained more information than me though, indicating that an NVMe-fronted product may be due in September this year.

Personally, I don’t see how Violin has any chance in making it in such a competitive market.  The investment needed to compete in today’s market, both from a marketing and technology standpoint doesn’t seem to be justified for technology that wasn’t designed in the age of NVMe.  Yes, I realise that theoretically Violin doesn’t need NVMe because they have a custom solution, but don’t forget that IBM said the same thing less than 12 months ago (see the following video).

However, Mr Lewis feels confident that Violin Systems still has a competitive edge in the market and that customers will be prepared to pay for their storage offerings.  With that in mind, I’d recommend re-watching the following Tech Field Day video from September 2015, when the team at the time continued to push the message of how superior the Violin technology was.