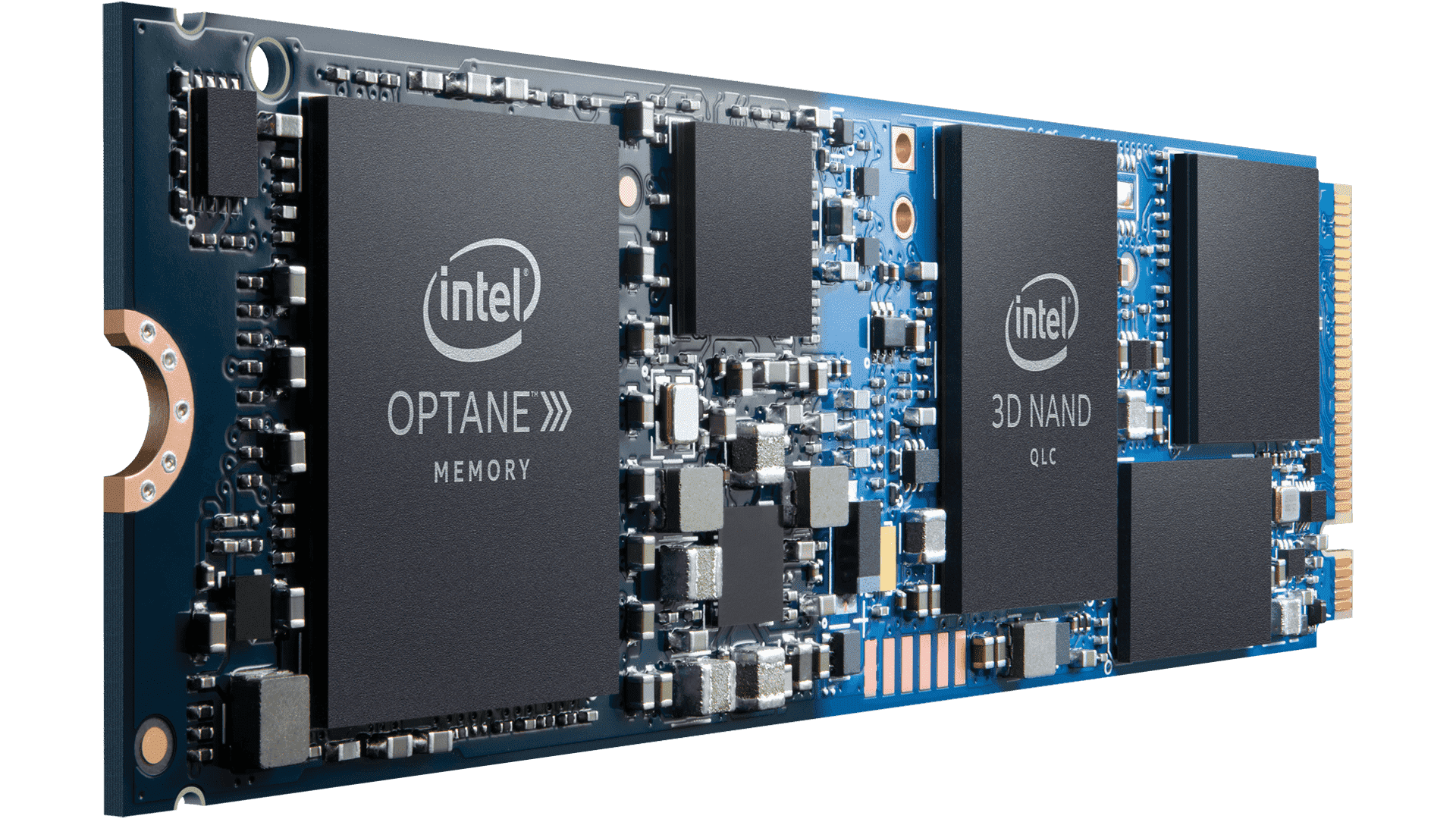 On this week’s podcast (publishing 15th January 2021), we’ve been discussing the adoption of Intel in the data centre.  The Intel H10 consumer SSD looks to combine the best of Optane and QLC in a hybrid device but unfortunately falls short of the mark.

Update: it seems that Intel is stepping away from the consumer Optane device market as indicated in this post by Jim Handy (via Tom’s Hardware). This approach seems to be against logic, as data centre demand will take many years to generate enough demand to reduce Optane costs by increasing volume.

In the hierarchy of storage, Optane is poised to take the middle ground between DRAM and NAND Flash, offering both increased performance and resiliency, albeit for an additional cost.  Optane is offered in two forms – as Persistent Memory that uses DIMM slots and the SSD format in a range of form factors (AIC, M.2, U.2).

The DIMM form factor requires a specific Intel CPU and chipset, as the interface between processor and DIMM uses DDR-T, a proprietary protocol.   It’s not possible to simply put Intel Optane PM into any server and expect it to work (bear that thought in mind for later).

Intel Optane SSDs, on the other hand, should work directly with standard operating systems and hardware that support NVMe.  This includes Optane-based SSDs.

The Intel H10 is hybrid Optane and QLC NAND SSD using the M.2 “gum stick” form factor that (in theory) should offer the capacity of NAND and the performance/endurance of Optane in a single device.  Unfortunately, the design of the H10 means that assumption isn’t that simple.

The H10 contains both Optane and QLC NAND, with separate controllers for each media type.  However, there is no onboard logic to optimise the two media together.  Instead, the device presents two bifurcated PCIe 3.0 x2 NVMe drives to the host.  To use the Optane as cache, the operating system needs to support Intel’s Rapid Storage Technology (RST) software, which manages the caching process between the two presented media.

While Intel has extended support for RST, the ability to support bifurcated PCIe 3.0 x2 isn’t widespread and certainly not supported on an M.2 caddy plugging into a Thunderbolt 3 connection (which is what I’m using).

Now, I should know better than to leap into purchasing an H10, especially as we know Optane Persistent Memory is very hardware-specific.  However, I expected a little more from this consumer device.  The H10 I ordered will connect to my Mac Mini M1 via a Thunderbolt 3 caddy, but in performance tests, I see equivalent throughput to that of a SanDisk 500GB Extreme Pro Portable SSD.  Obviously, the Optane isn’t being used. That’s disappointing.

So why hasn’t Intel produced a standalone hybrid device that can be used on any platform, rather than requiring host software support?  Here are a few possibilities:

I’m disappointed that I didn’t do enough research before leaping in and buying the H10.  That said, the experience has shown me that Intel’s deployment of Optane is still heavily tied to processor support and compatibility.  Is this a deliberate defensive position to prop up x86 sales or merely the logical process of bringing a new medium to the market?

I expect U.2 and AIC form factors to be easier routes for Intel to introduce a true hybrid.  I’d like to see Micron step up and use their 3D-XPoint capabilities to offer native SSDs and hybrid drives.  Currently, the only Micron 3D-XPoint product is the X100, for which news and information seem thin on the ground.

In the end, all is not lost.  At some point, I will have another desktop or server that can exploit both the Optane and QLC on the H10.  It’s just a shame that’s not today.