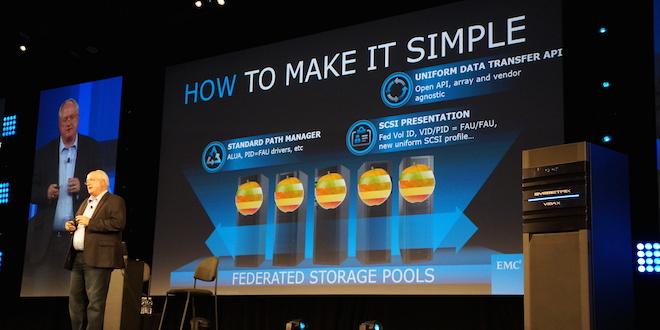 One of the more interesting announcements from EMC World 2014 last week was a new platform from EMC called Elastic Cloud Storage (ECS).  ECS is the “productisation” of the previously announced Project Nile, which I discussed last year.  At the time, the indications were that Nile was some kind of packaged VNX solution sold in a cloud/scale-out model.  We now know that’s not the case and in fact ECS takes some of EMC’s recent storage acquisitions and put them together into a totally new product.

ECS is a combination of ViPR (automated provisioning tool) and ScaleIO, a distributed scale-out block storage architecture acquired by EMC in the middle of 2013.  It is aimed at delivering capacity rather than performance storage, much like Amazon’s S3 service.  The hardware component is provided by Atmos, EMC’s scale-out cloud storage hardware offering.  EMC haven’t specifically said (as far as I am aware) that the hardware is Atmos-based, however looking at the hardware data sheet for Atmos and that for ECS, the hardware is almost identical in specification and description and some of the geographic distribution and protection features are clearly Atmos-based.  Reusing hardware components makes complete sense and EMC appeared to have done some engineering work to get high density chassis features into Atmos.  It wouldn’t make sense to throw that work away and start again.

Update: Following Twitter conversations with Chad Sakac, Brian Gracely and Mark Twomey, EMC have confirmed that the hardware may be common but isn’t a direct re-use of Atmos in ECS.

Moving on to software; ECS uses the latest 2.0 release of ViPR, which brings wider support for managed platforms from a range of vendors including HDS, HP, IBM, Dell, Oracle and Solidfire while extending support to most of EMC’s existing products (Isilon, ScaleIO, VMAX & VNX).  I’m not aware of any official 3rd party vendor support announcements, so presumably EMC is using standard interfaces such as SMI-S to support these hardware platforms.  Although technically this should work, I’d not be confident that this is the most optimal way to go.  However I doubt any competing vendor is going to agree to improve EMC’s software by opening their APIs.

ScaleIO adds block support to ECS (which has existing support for object through the initial release of ViPR data services). This is an interesting product which seems to have had a lot of thought behind it.  I sat in one of the technical presentations last week, given by ScaleIO’s CTO.  He covered many of the issues around distributed data management, performance, scale, load balancing and failure management and was able to quickly answer any questions from the audience.  My only reservation (or perhaps area of interest) was the way in which node metadata is distributed between the server and client components of the ScaleIO architecture.  This seemed so efficient to be nothing short of miraculous.  Perhaps a deep dive into this in another post would be appropriate.

It’s clear that EMC is concerned about the loss of business from the migration of data by customers who previously ran their hardware products into cloud environments like Google and Amazon.  One presentation slide from last week shows ECS compared to the Google/AWS offerings and reaching a $0.0201/GB/month equivalent cost (over a 4 year term), making it theoretically cheaper than both Google and AWS by around 25%.  Unfortunately this isn’t a valid comparison for a number of reasons.  First, looking back at the way both cloud services have priced their storage offerings, we’ve seen continual price erosion (see my recent post on this) and it’s unlikely that prices will flatten or rise anytime soon.  Looking back less than 2 years ago and we see S3 pricing starting at $0.125/GB/month compared to $0.03 today and even lower ($0.01) for Glacier.  This means over the 4 year example quoted by EMC, prices from Google and Amazon are likely to be half what they are today.  Secondly, EMC requires customers to purchase ECS in large capacities and there’s no option to scale down as well as up.  This means capacity is likely to be purchased before it is needed and can’t be released if it is no longer required.  While storage utilisation doesn’t typically go down, true cloud solutions would offer this flexibility.

EMC are never going to compete head-to-head against the big cloud providers.  The two models of on and off-premises storage are not compatible; customers using AWS for example are likely to also be using compute services which means the data needs to be closely co-located.  However what ECS may do is make some EMC customers look at whether they are better off keeping their data onsite and ECS may be one easy (and relatively) cheap way of doing that.  With concerns around data privacy and security (especially with issues like the one Microsoft is experiencing), the idea of private cloud looks more and more appealing.  This may well be ECS’s niche.

EMC are facing erosion of their traditional storage business and they need other routes to market to replace this revenue loss.  ECS is an interesting approach to delivering cloud-scale capacity for those customers who don’t want to share their data publicly.  The success of ECS may well reside in EMC’s ability to successfully integrate the acquisitions they have made over the last few years and deliver actual products from them.

It’s funny how only 5 years ago, EMC would have laughed in the face of competitors assembling storage products from multiple vendor components.  Today it’s become a core piece of their business.