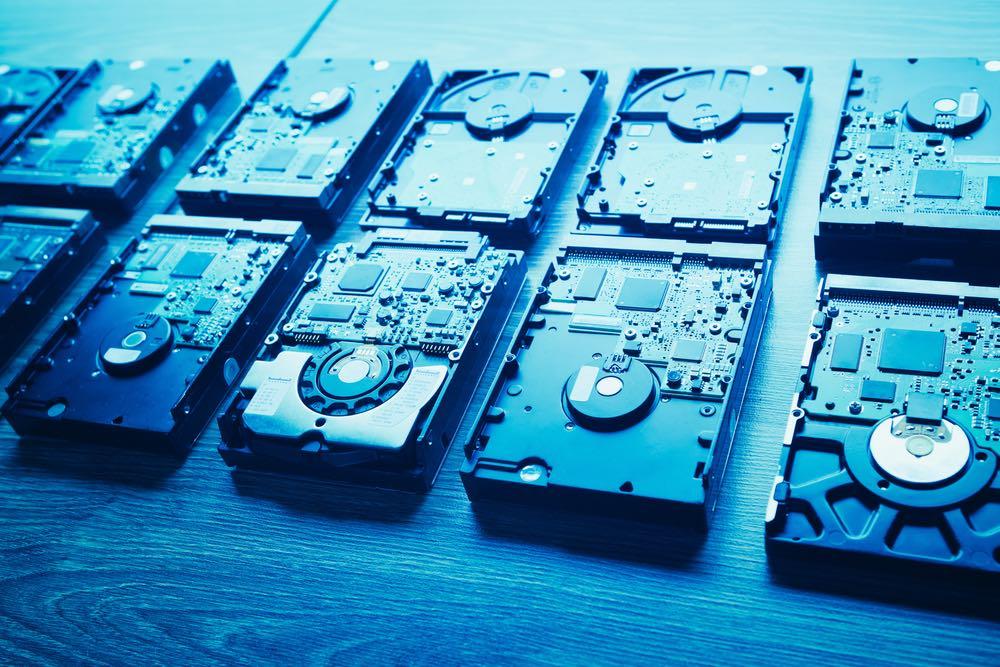 As I think I’ve mentioned a few times on this and other blogs before, around the late 1990s I looked at the practicality of creating a distributed storage platform that would act as a backup for personal storage.  As the amount of data being personally stored was increasing (via photos, video and other content), being able to take a convenient backup was also getting harder.  UK phone lines weren’t adequate to take the backup traffic needed to secure gigabytes of data and broadband was still relatively in its infancy.

My concept was to take a dataset, shard it in some way to protect and split the content, then distribute the shards to others willing to “rent” spare space on their hard drives.  With many contributors and multiple copies of each shard, it would be theoretically simple to recreate lost data.

I remember calculating that with a small amount of metadata (that could be written to something persistent like a CD-ROM or DVD), hundreds of gigabytes could be protected.  Rather than backup tens or hundreds of gigabytes of data, just keeping the metadata on disk (or these days a memory stick) would be all that was required to hydrate the original content.

I never followed up on the project, mainly because developing the maths behind the de-duplication and protection (which was effectively erasure coding) would have required a huge amount of time and effort.  Also, the business model didn’t really stack up.

Roll forward some 20 years and we have all the pieces coming together.  Fast broadband is available.  Hard drive capacities have reached crazy levels for an incredibly low cost.  Computing power means erasure coding calculations are relatively trivial, especially for backup data.  One potential piece of the puzzle – the ability to assign proof – is available through blockchain.  Put this all together and you have a technology like that being promoted by Storj (apparently pronounced as storage) an open source distributed storage platform.

The idea is pretty simple and very much what I’ve already described in my original concept.  Share your drive space and get paid for it, while paying a relatively small amount for any content (and bandwidth) you need to protect and store across the Storj network.  Storj acts as a broker, taking a small cut of the transactions and using that to promote the model.  As the solution is decentralised and protected using blockchain, it makes things much more secure than having a single entity or physical location for storing data that could be hacked.

So how can people be paid with a decentralised model?  The answer is cryptocurrency and in this instance Storj Token (stylised as STORJ).  End users (known as farmers) who want to rent out their disk space effectively “mine” STORJ, assigning a portion of their capacity for use by the network and receiving STORJ in return for data stored.  Here’s where things get a little sticky.  The Storj FAQ indicates that the price offered for STORJ depends on the market and “users will only agree to prices they find competitive“.  This seems a little vague and potentially at risk of wild price swings if a glut of cheap capacity comes onto the market.

Of course, Storj isn’t the only player in the market.  Filecoin offers a similar service, with the same concept of making money from free disk space.  You can find out more at the Filecoin website, including a paper that talks about some of the maths behind the technology.

Storj quotes pricing that is somewhere between AWS Standard and Infrequent Access S3 storage, at $0.015/GB per month.  This is around double the price of the most popular backup plan on SpiderOak.  So who will pay at this rate?  My assumption is that currently the Storj pricing is indicative and expected to drop.  As a result, the benefit for farmers looking to make money from building out dedicated backup capacity might be negligible.  Instead, the most likely beneficiaries are those that already have equipment powered on and active for other reasons and so don’t have to offset the returns of being a farmer against power and network bandwidth charges.

Obviously, it goes without saying that I like the idea.  However, with only three copies of data distributed across the network, is there enough protection to cater for farmers who drop away, have hard disk failures or simply don’t have their storage online at the time it’s needed?  I’m sure Storj have done the maths, so this (and filecoin) will be one to watch in the coming months.  I will be signing up, if for no other reason than to see how the project develops.