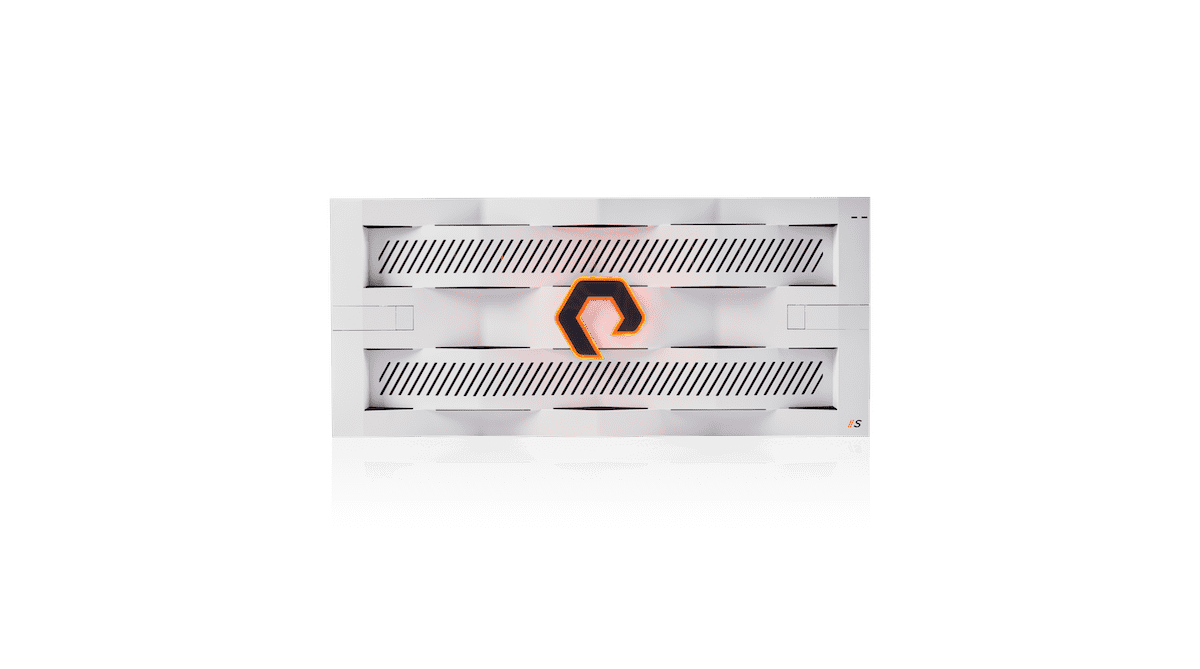 It’s been five years since the introduction of the first FlashBlade architecture.  Today, Pure Storage announced FlashBlade//S, the most significant upgrade to the platform since launch.  We dig into the announcement and look at the implications for customers.

Pure Storage initially introduced the FlashBlade product line in 2016.  We covered the announcement at //Accelerate 2016 in this blog post.  In comparison to most scale-out storage solutions that use multiple servers as nodes, Pure decided to build a modular, bladed architecture where each blade encompasses compute and storage.  Compute was implemented through an Intel Xeon SOC (system on chip) design, while NAND storage sat on a custom daughterboard that contains NVRAM and FPGAs with ARM cores.

Over time, Pure has expanded the initial 8TB or 52TB blades to 17TB and 52TB capacities (with TLC flash) and extended support from 15 blades in a single chassis to 150 blades over ten chassis.  Networking expanded from 40Gb to 100Gb, delivering 15GB/s of bandwidth per chassis or 24 million NFS IOPS in an entire 150 blade system.

Since its introduction, the use cases for FlashBlade have expanded to cater for greater capacity depth (such as data protection) and high performance (including AI and analytics workloads).  As a result, the limited configuration choice of either 17TB or 52TB blades means customers risked overbuying on performance or capacity.  Customers need increased flexibility in configuration choices to grow systems organically over time.

Although the bladed architecture provides a much-simplified deployment model compared to node-based architectures, the original FlashBlade design meant storage and compute were tied together at the hardware level.  If either component suffers a failure, both must be replaced.  The data on a replaced blade must be rebuilt, taking time, and impacting the I/O capability of a running system.

The announcement of FlashBlade//S introduces a revised hardware design to the platform.  The previous 4RU chassis holding 15 blades is replaced by a 5RU system that supports up to 10 blades (with a minimum of 7).  Each blade now supports up to four removable DFMs (DirectFlash Modules), either 24TB or 48TB capacity (at least one required per blade).

FlashBlade//S mirrors many of the attributes introduced with FlashArray//XL in December 2021.  Both systems are now 5RU, both offer up to 40 DFMs, and both use the Ice Lake architecture.  The result is standardisation on core components, most notably DFMs.  Both FlashBlade and FlashArray will use the same flash modules in the future, providing many benefits, including:

Ironically, the use of DFMs in FlashBlade takes Pure Storage full circle in its product design.  The genesis of DFMs came from FlashBlade and was introduced into FlashArray with FlashArray//X in April 2017 (see this post).  The seeding of DFMs goes further back to FlashArray//M in May 2015, with the dual SSD caddy design (the post just referenced explains a lot more background on this).

Although the new FlashBlade design is 1RU taller than the existing FlashBlade (and holds ten rather than 15 blades), the storage density increases by almost a factor of two – 52TB x 15 blades ÷ 4 = 195TB/U to 48TB x 4 x 10 blades ÷ 5 = 384TB/U.  The new chassis supports 400Gb Ethernet, although only 100GbE will be available at launch (retaining capability for future in-place upgrades).  The power profile of FlashBlade//S results in greater efficiency than the previous system, despite the total power demand increasing (like the FlashArray//XL).

As a standalone product, the upgraded FlashBlade design provides customers greater choice and flexibility to scale solutions based on workload demands.  This has positive benefits on cost and environmental efficiency.  However, there’s a more significant benefit for customers and Pure Storage when deploying larger fleets of mixed FlashBlade and FlashArray platforms.

In FlashArray//S, a blade failure no longer requires an entire data rebuild, as DFMs can be removed and inserted into another blade (either a free slot or an entirely new blade).  As the same DFMs are used across platforms, these components become interchangeable between FlashBlade and FlashArray.  This capability enables customers to rebalance storage capacity across systems without overbuying hardware.  Crucially, in solutions delivered as-a-service, Pure can now choose where to place capacity to get the best efficiencies in both performance and compute.  This process is aided by the capabilities of Fusion and the data collected by Pure1.  From a financial perspective, Pure has introduced new Evergreen options, which we will discuss in a separate post.

Pure Storage has refreshed FlashBlade hardware, while the architectural concepts of the platform remain the same.  Purity//FB 4.0 maintains the shared-everything design and global flash management capabilities introduced five years ago with the original FlashBlade.

From a design perspective, FlashBlade//S represents the system Pure always wanted to design.  CTO Rob Lee discusses this aspect on a podcast we recorded for the launch (here).  In the context of the market, customers want reliable, scalable, and efficient storage systems with little or no manual rebalancing or management.  The updates to FlashBlade move further along that journey.

New hardware designs are great but need to be aligned with workable financial models.  If you’re coming to this post first, we recommend reading this post next, which covers the updates to Evergreen.  Don’t forget to listen to the podcast with Rob Lee, as this discussion fills out more details on the ethos behind the design and positioning of the FlashBlade platform.

Ultimately, we’re impressed by the design choices and direction of FlashBlade//S. We believe the changes will make the platform more attractive to customers, especially those familiar with FlashBlade. We look forward to seeing more details on customer implementations and use cases, especially in large-scale environments with multiple uses on a single platform.

Copyright (c) 2007-2022 – Post #fbfa – Brookend Ltd, first published on https://www.architecting.it/blog, do not reproduce without permission. Pure Storage is a Tracked Vendor by Architecting IT in storage systems and software-defined storage. Pure Storage has been a customer of Brookend Limited prior to 2022.