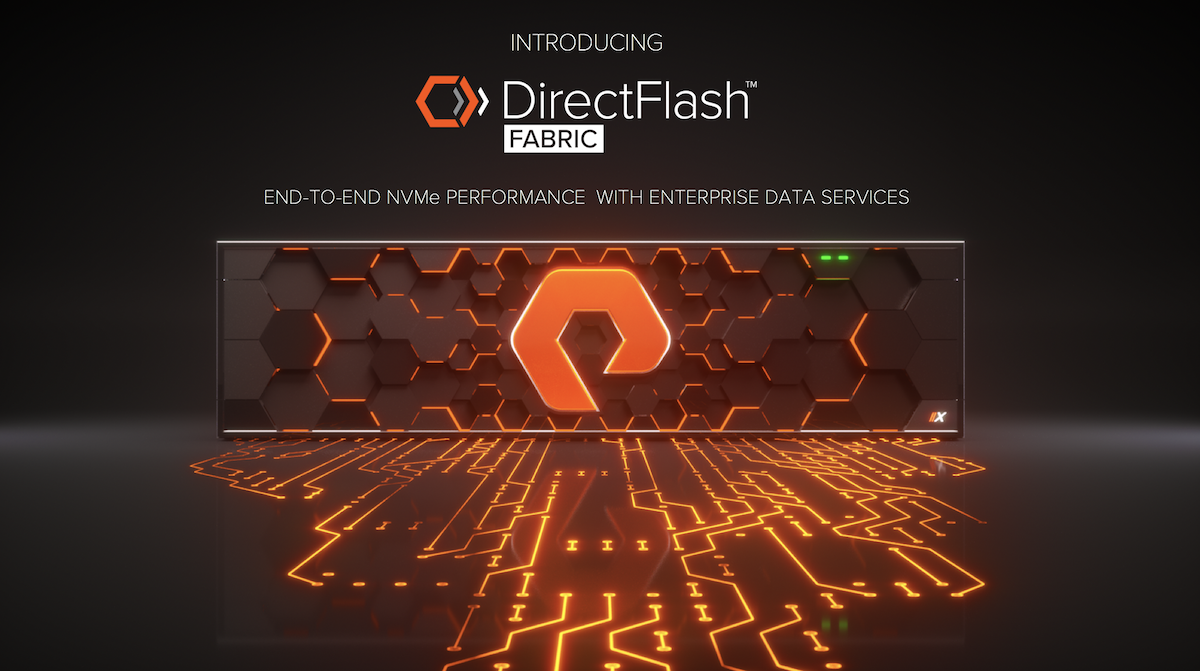 Pure Storage recently announced support for NVMe over Fabrics on FlashArray.  The technology is implemented by an upgrade to Purity (the platform O/S) and installation of RDMA-capable Ethernet NICs.  Pure has chosen to go with Ethernet as the first NVMe fabric offering, while other vendors have chosen the Fibre Channel route.  How has this choice been made and how does this form part of Pure Storage’s NVMe strategy?

The new NVMe-oF capability for FlashArray has been branded as DirectFlash Fabric.  DirectFlash already encompasses the NVMe module architecture introduced in 2017 and the capability to use NVMe-oF for native shelf expansion, introduced at Pure Accelerate in May 2018.

DirectFlash Fabric offers front-end NVMe-oF connectivity using RoCE (RDMA over Converged Ethernet v2) at either 25Gb or 50Gb Ethernet speeds.  Customers have been able to use the new feature simply by installing RDMA-capable NICs and non-disruptively upgrading to Purity 5.2.

As the NVMe over Fabrics industry evolves, there’s a clear choice to be made between using NVMe over an Ethernet or Fibre Channel infrastructure.  We can set NVMe/TCP aside for now, as this technology is perhaps too new to be part of the discussion.  Pure has decided to take the Ethernet route, claiming this makes more sense for the support of applications currently deployed on DAS platforms running on Linux.

Certainly, there are reasons to do this, just as there are justifications for using NVMe on Fibre Channel too.  We’ll cover this argument in a separate post.  However, for now, the choice for FlashArray is NVMe with RoCE, followed by NVMe support over Fibre Channel when supported by major platform vendors like VMware.  NVMe/TCP will appear on FlashArray in 2020.

The emphasis on DAS-based applications (those running with local storage), means Pure Storage can focus on expanding the platform to servers that currently don’t use centralised storage.  Whilst this initially seems to go against the concept of why DAS was used on scale-out solutions like MongoDB, in reality, consolidating storage from scale-out applications makes sense.  We’ll cover this discussion in detail elsewhere, but for now, imagine consolidating a scale-out database like MongoDB onto a single platform.  Now data can be replicated for front-end application performance, without compromising on storage over-allocation because data will be de-duplicated at the back-end.  Moving back to a SAN-based model resolves a lot of the issues we used to see with DAS before SANs were implemented 20 years ago.

What can customers expect in terms of performance?  Currently Pure are quoting around 200-300 microseconds of latency, with savings over iSCSI of 50% and 20% compared to Fibre Channel.  These are probably the only numbers we’re likely to see published, as in recent years the company has moved away from publishing full platform performance throughput numbers.  These figures compare to the data seen from other enterprise storage platform vendors (think 3PAR and NetApp).  The battle here is not about raw performance per-se but improving performance and reducing latency while still retaining enterprise-class features in place.

DirectFlash Fabric is another step towards a rack-scale architecture for Pure storage solutions.  NVMe-oF provides a way to consolidate local storage that otherwise may never have been moved to a centralised solution.  We can expect this trend to increase as NVMe/TCP evolves and application servers gain the capability to use generic NICs rather than only RDMA-capable ones (or Fibre Channel, for that matter).

FlashStack (Pure’s CI offering) shows how rack-scale can work, however, I suspect the real value here for NVMe-oF using Ethernet and in the future, TCP, will be to provide storage to generic and composable infrastructure platforms. How will the company address the requirements of composability?

Pure Storage is already starting to diversify with cloud offerings and a move to data protection.  Addressing the needs of composable solutions could perhaps be the piece that completes the current infrastructure puzzle.