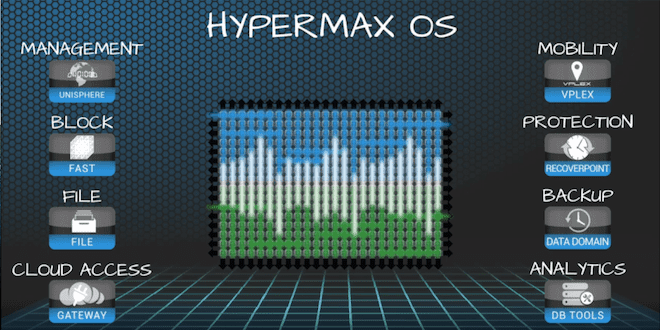 Last week EMC announced an upgrade to their flagship Symmetrix high-end enterprise storage platform and the release of VMAX3.  With a maximum capacity of 384 cores and 5760 drives, the new platform scales to capacities never before seen in a single storage array.  What’s possibly more interesting though, is EMC’s intentions with what’s being called HyperMax technology.

VMAX3 continues a long line of enterprise storage products based on the Symmetrix brand name.  When VMAX2 was released for EMC World in 2012, the platform scaled to 3200 drives and 4PB of capacity.  At the time this seemed like a colossal amount of information to place into a single array.  EMC has since upped the ante and VMAX3 scales to a capacity 80% higher in terms of drives (using 2.5″ models), and a potential capacity of 9.6PB for the 400K model, based on planned software updates in 2015.  You can check out some of the speeds and feeds on Rob Koper’s post.  It feels like EMC have been taking their design direction from the motor industry, where America looks to lead by producing ever bigger engined and faster cars that are great in a straight line but not so good in the corners.

By way of comparison EMC used Hitachi’s VSP platform, quoting it as their nearest competitor.  It’s true that VMAX3 supports over twice the drive count of VSP G1000, although using that as a measure of capacity fails to take into consideration the external virtualisation feature of VSP, which increases the capacity considerably.  Similar claims can also be made for front-end host ports (256 compared to 192), although the sheer cost of connecting 256 ports to a Fibre Channel infrastructure means full connectivity will be the privilege of the few.  EMC also claim more cores, more “density” more flash and more cache.  All this is true, when comparing a single array to another, however things are just not that simple.

To make a fair comparison, we have to look at the architectures of the VSP and VMAX3 arrays.  With VSP, HDS introduced the idea of a virtual storage director (VSD), which decoupled the physical port from the processor(s) managing it.  This allows workload to be diverted to a VSD to best balance front and backend workload.  This is a feature (called Dynamic Virtual Matrix) EMC is introducing only now with VMAX3 and something VSP offered four years ago.  The new VSP G1000 platform builds on these features and extends the capacity of a single array, with a feature called “global storage virtualisation” allowing multiple VSPs to be linked together in an active-active cluster configuration, potentially extending capacity but more importantly allowing seamless non-disruptive migration between arrays.  This is something that is essential in managing hardware migrations with mixed workloads.  The new features come in something called SVOS (Storage Virtualisation Operating System), and evolution of Hitachi’s array operating system that will form the basis for future platform evolution.

So as we can see, hardware claims for VMAX3 are more focused on raw acceleration than ability to cater for the bends and turns in the road.  However EMC’s plans for a new feature called HyperMax might be more interesting.  Having 384 processor cores simply to deliver I/O and basic data services alone is a massive waste of resources, never mind the power and cooling associated with it.  However this compute power does allow EMC to add more advanced services to VMAX3 and in fact EMC quoted features such as mobility (built in VPLEX?), data protection (RecoverPoint and the new backup feature ProtectPoint writing to DataDomain), cloud access (through the TwinStrata acquisition) and other potentials such as file access and database analytics.  Jeremy Burton indicated in his presentation that VMAX3 contains a “storage hypervisor”, which would provide the ability move some of these services into the VMAX3 itself rather than as today, sitting outside and being part of a design solution.  We also know that EMC has been working for some time on producing virtual appliance versions of many products such as VPLEX, so the progression is obvious.

EMC are still focused on the scale up nature of VMAX, the ultimate muscle car of the storage industry.  As the company strives to keep VMAX relevant, the company are adding new features to provide advanced services as part of a data centre consolidation story.  However there are still too many confused messages with significant platform overlap (XtremIO, VNX).  Even within the VMAX “family” things aren’t clear.  The previous VMAX generations (10K/20K/40K) are retained because VMAX3 has no mainframe support or protocol support for FCoE, iSCSI (and obviously FICON) in the first iteration.  None of which of course was mentioned in EMC’s announcement presentations.

The integration of more software features is a good thing; but even with this approach, high end storage will still continue to decline; it will take more than sheer capacity to keep VMAX relevant.