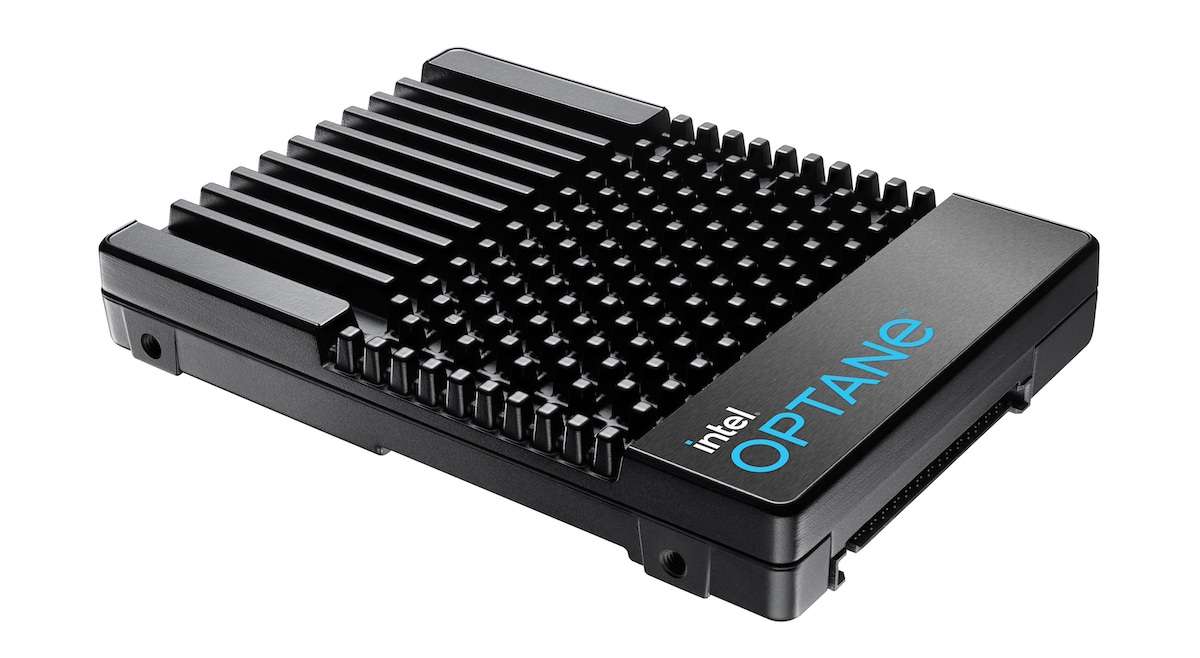 Flash hasn’t replaced the hard drive.  Hard drives didn’t replace tape, so why would Intel see Optane replacing NAND flash within the next two years?  Like all grand statements, the detail behind the scenes is a lot more nuanced.

Update: It seems (according to this post by Jim Handy), that Intel is moving away from the Optane consumer market. More thoughts on this at the end of this post.

At the Intel Memory and Storage Moment event in December 2020, Rob Crooke (SVP and GM of Intel’s NAND business) presented a slide showing the cutover of NAND TCO reaching a point where the cost per TB per rack would make NAND flash more attractive than HDDs.  The same slide also shows a declining cost for SSD and HDD in a raw $/GB metric.  This chart, however, shows SSD has some way to go past 2025 before this cutover is reached.

As we analyse what this slide is saying, we should remember that TCO can be modelled to reflect anything we like.  The “Total” in TCO generally reflects the metrics and the parameters to which the customer is sensitive.  This means a TCO for one business isn’t applicable to another.  Architecture designs also have to consider the requirements of the application.  If raw random read I/O performance is essential, for example, then a system design will deploy way more HDDs than SSDs and probably see little or no benefit from adding caching.  This scenario makes it easy to justify SSDs because of the power and cooling savings alone.

Of course, we shouldn’t discount Intel’s claim outright.  Over the years we’ve seen new media replace traditional storage products, generally at the high end and working down.  There’s a good reason we draw the storage hierarchy in the way we do because these new media are usually expensive, used in small quantities and targeted at resolving a particular problem.

Optane and other similar technologies are being introduced into the hierarchy, in the same way, resolving the issues experienced at the extreme ends of performance.

Look back over the history of storage media for the last 20 years, and we see a similar evolution.  The HDD market expanded widely to meet customer demand, with drives spinning at 15K down to 5.4K RPM, scaling from hundreds of gigabytes to now tens of terabytes.  HDDs also modestly adapted in form-factor with 2.5” and 1” models, and half-height 3.5” drives.

As NAND technology developed, SLC started to displace high-end 15K RPM drives, with this process picking up pace as more affordable MLC and TLC drives came to market.  We then started to see the replacement of the 10K market, which arguably is still in progress.

However, NAND has become the tier of choice for active workloads because I/O performance and the I/O blender effect demand persistent storage that can manage random I/O effectively.  As data volumes grow, we see the HDD moving towards capacity and NAND continuing to expand in the performance arena.

What does that mean for Optane?  NAND flash vendors want to get the highest density possible in their products and reduce the $/GB figure.  In a competitive market where the $/GB metric is king, cramming more capacity into a similarly priced drive keeps unit sales consistent while offering increased value for money.  This is what the move to TLC, QLC, and eventually PLC is set to achieve and follows the exact same path as the HDD vendors.

We discussed this scenario in a recent Storage Unpacked podcast, where we showed that top-end capacity drives have sat around the $600/unit price mark for years.

The challenge for flash is that the techniques used to increase capacity also have adverse effects on NAND performance and endurance.  Both characteristics get worse with increasing NAND SSD capacity.  This mirrors the challenge with HDDs, where the mechanical nature of drives results in ever worse I/O density.

Enter Optane SSDs, with incredible endurance, better latency than SSDs, albeit with an increase in $/GB cost and smaller device capacities.  We’re seeing a process of history repeating itself.  I predict we will gradually see Optane used for performance requirements, while NAND continues to move towards meeting the affordability equation of price, capacity and performance. Hard drives continue their move to the archive tier.

The introduction of Optane is a process we’ve seen before.  The only unknown is how long adoption will take to make the technology the first choice for application performance.  There is also another angle to consider, and that is how Optane as persistent memory will gain traction.  Intel continually touts MemVerge as an example of this solution (see a recent podcast we recorded with CEO Charles Fan).

In five years’ time, we won’t have seen Optane replace NAND, but we can be sure that both will be heavily adopted by the enterprise and consumer markets.

Update (19/1/2021): It seems that my commends on consumer adoption may be a little premature. It appears Intel is stepping away from the consumer market, with no intention of replacing current all-Optane drives. Instead, the disappointing H10 and H20 will continue with their requirement to use specific Intel processors and chipsets.

It seems there’s a real chicken and egg situation here. Optane costs are high and Intel doesn’t make enough margin (if anything) on the current product generations. However, improved efficiencies come from generating greater demand, which is massively assisted by the consumer market.

At the same time, Intel appears to be placing all bets on Optane DIMMs, which seem to have little traction in the enterprise. As one Intel CEO is replaced by another, perhaps we need to let the dust settle and see what the new long-term strategy will be. The ups and downs of Optane technology are not over yet.